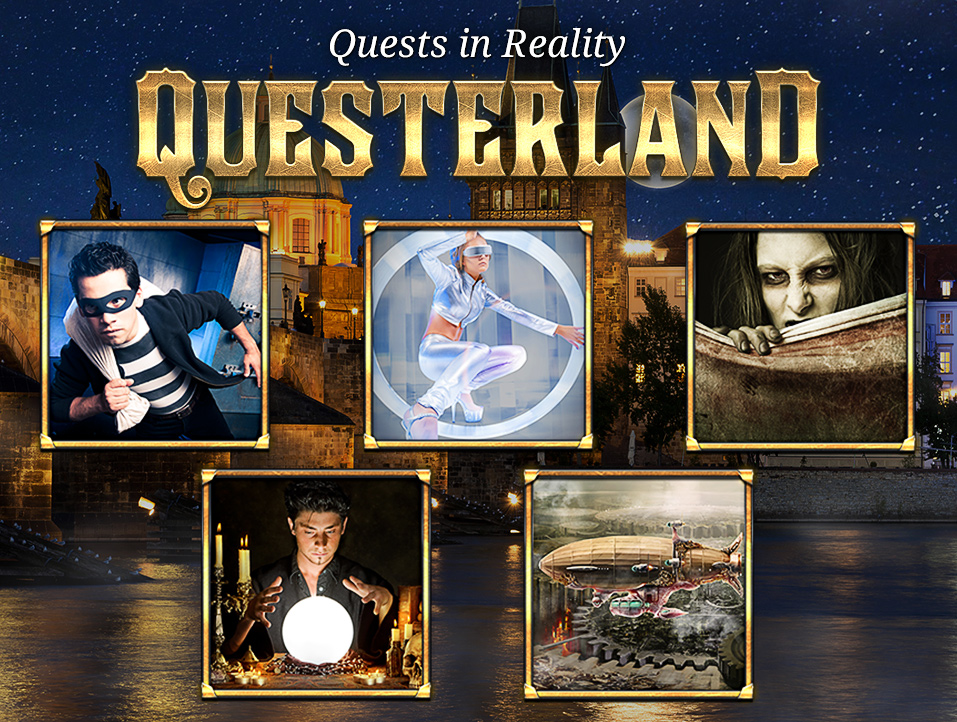 What are the escape games?

Imagine yourself playing a PC game, where you have to escape the room in 60 minutes using and combining the things you have nearby, and solving different riddles. But this is happening in real life – and we mean HERE and NOW. If you won’t be able to escape in an hour, the door will open anyway, but you won’t feel yourself as a winner. You may play this quest together, even wtih three or four teammates.

Escape room – fun for everyone

Each game is a new world

Decorations and special effects just like the ones in the movies. You and your team are the only actors. This is a new story, you can’t get enough. Come and you won’t regret it.

Our specialties – What are the escape games?

The name QUESTERLAND origins from the word “quest”, or in other words  – adventure game, which is one of the basic PC games genres, showing us an interactive story that can be played. The most important elements of the quest game mechanics are the story and exploration of the world, and the key role is the solution of puzzles and tasks, that require some mental activity.

Escape game as an interactive attraction

We try not only to make an escape game, but interactive attraction.

Questerland is one of the biggest escape games center in Prague. There are 6 escape games with a completely different storyline, located in a room of 500 sq.m. At this time, there are 3 games opened. The fourth one is being developed.

Escape game for us means real-time standalone adventure movie with a plethora of puzzles, riddles and brain teasers. The basic difference of our approach are the realistic decorations. Budgets of our quests are increasing with every new game. To create the natural entourage and decorations just like in the movie we are ready for any expenditure whatsoever.

Our second specialty are technologies. We are technocrates. We dig new inventions and technologies. To our opinion, escape games or quests are automatic robotized clever rooms, who play with you on their own.

We develop the technology of new unique equimpent usage for our future quests. We’d like to use virtual reality helmets, simulators, 3D printers.

Each new game will be better than the previous one. We don’t repeat ourselves. We are developing.

Each Questerland’s new game is not just a room consisting of puzzles and tasks. This is immersion into the unique atmosphere created by a beautiful complete storyline, where each puzzle and each task create the complete image. Even if you have already been to escape rooms and you weren’t satisfied, may they not be your guideline. Probably they were just a bad realization of a good idea.

We are creators of escape games worlds. It takes up to half a year to create one game. The budget of one game frightens us. Questerland is a new entertainment industry.

We adore quests and we’ve visited more than 100 quest rooms throughout the world.

Unfortunately, most of them simply aren’t good. This branch of entertainment industry just begins to develop. The most frequent creators of such escape games are amateurs trying to create rooms with a plethora of locks, calling them “exit rooms”.

We want to change the understanding of quests globally. Each quest for us is a different world, which needs to be worked out in details. You don’t have just to solve the puzzles – you can do it at home sitting in front of the PC. You must PLAY or even LIVE in this world and forget about the reality, fully immersing into the interactive environment.

Quests themes are purposively chosen, to distinguish them from the daily reality. We’ve got projects of enormous quest worlds. But before we bring them to life, we need professional skills and staff.

We plan to create performance quests – the quest games with professionals actors living in these games. An action quest game, similar to Fort Boyard is being developed by us.